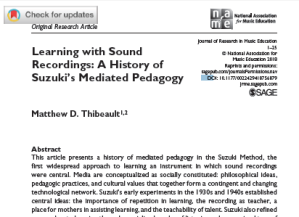 The Journal of Research in Music Education has published “Learning with Sound Recordings: A History of Suzuki’s Mediated Pedagogy.” In it, I draw attention to the ways that Suzuki’s pedagogic innovations are deeply enmeshed with media of sound recording. I also talk about the Method’s migration to America through the efforts of John Kendall.

The article includes supplemental material drawn from a variety of archival sources.

Finally, for those interested, here are a few more photos that were not essential for the article, but which are a pleasure to share.

John Kendall on the importance of recordings in the Suzuki Method

Outside the Suzuki Museum in Matsumoto, Japan.

Suzuki’s study, where he listened to graduation recordings for every student from the 1950s to 1990s.

A test pressing 78 for Suzuki’s recordings.

With Hiroko Suzuki, Past President of the Talent Education Research Institute, and who played at the 1955 graduation concert that was filmed and shown in the US.

Ryugo Hayano, President of the Talent Education Research Institute. He was one of the ten children who first toured the US with Suzuki (and he displays a photo of himself at that age on his phone).

At the Suzuki Museum, holding Suzuki’s copy of the 78 recording of his Twinkle Variations 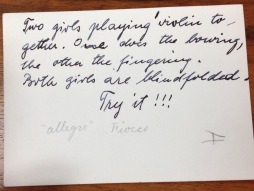 Suzuki’s hopes for his Method extended to an edition of one of his essays in Esperanto. In the Southern Illinois University John Kendall Collection.